Harsh Facts of the Week

Almost 90% of all floating materials in the ocean are plastic. Plastic is an extremely harmful pollutant because it does not readily break down in environments.

Marine debris, most notably plastic, kills more than one million seabirds and 100,000 mammals and sea turtles every year.

Studies done in the North Sea revealed that a type of seagull called fulmars averaged thirty pieces of plastic in their stomachs.

300,000 dolphins, whales and porpoises die each year after becoming entangled in fishing nets.

Between fifty and sixty million tons of untreated municipal waste is disposed from China's coastal cities every day.

Oil is deteriorating the quality of the ocean but only 12% of it comes from oil spills. The rest enters the oceans through runoff and drains.

Do you live in a coastal area? How much waste build up do you notice along your coast and in the water? What contributes to that? I encourage you to find out how and why your local waters are being polluted, and then to do something about it. I'm currently at a political program in my state's capital, Albany, and I've been learning a lot about lobbying and how to do it. I hope to write about lobbying or introduce a Guest Writer who is a lobbyist so that ordinary, environmentally concerned viewers, like you can learn how to make your voice heard in the government. 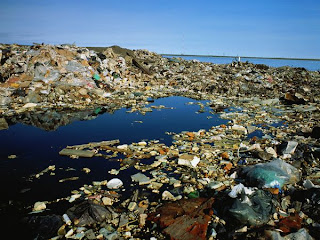 A dump in Alaska
Picture courtesy of: http://ocean.nationalgeographic.com/ocean/photos/ocean-pollution/#/alaska-dump_46_600x450.jpg

Unplugging Your Electronics
Are you going on vacation? Even just a small, weekend getaway? When you lock up and leave your home, the appliances in your house don’t just go to sleep until your return. Your household is still very much alive, and unless you take a small amount of time to unplug some common energy hogs, you’ll most likely end up senselessly paying money for appliances that are performing with no audience.

Electronics with remotes, standby, and digital displays are constantly using electricity. A general rule is the older and bigger an appliance is the more energy it uses. You can judge whether or not an electronic device is using a lot of electricity by placing your hand on the adapter to determine whether or not it’s hot. It is estimated that across the country, idle appliances use enough energy to power 8.7 million homes, which costs consumers about $11 billion.

Here are some power-guzzling electronics that you should consider unplugging while you’re away in order to save money and reduce your energy usage:

Cable Boxes: According to the EPA, cable boxes use just as much energy annually as refrigerators.
Computers: Sleep mode is helpful, but nothing can beat unplugging and cutting off the power source completely.
Televisions: So, you finally got your dream T.V. for the man cave- the massive, high quality picture, sparkling flat-screen. Going back to that general rule though, the bigger it is, the more it uses. Flat-screens typically use twice as much energy as their smaller counterparts.
Game Consoles: A study at Carnegie-Mellon University found that energy usage by game consoles grew by fifty percent between 2007 and 2010, currently accounting for one percent of household energy consumption. Again, sleep mode is helpful, but not the best option.
Heating and Cooling: Turn off your A/C while you’re away, and turn your furnace down between fifty and fifty-five degrees… no sense in controlling the temperature of an empty house.
Lights: Be sure that you’ve turned all of your lights off before you leave. If you’re concerned about deterring burglars, consider investing in a motion-sensor light.

Ninety percent of American residential energy consumption comes from household appliances. If we all took the time to unplug, not only would we save money, but Americans as a whole would be able to reduce our consumption, and subsequently our environmental impact. Of course, this isn’t something just for Americans. Unplugging is a simple and efficient habit for environmentally conscious people around the world to partake in. To read more in depth about this topic, check out my two sources below:

Rechargeable Batteries
2.8 million tons of lead-acid battery waste is generated each year in the United States, or about 18.24 pounds per person per year. Fortunately, lead-acid batteries have one of the highest recycling rates of any product sold in the U.S., and this is largely due to regulations because battery waste is toxic and should not be improperly disposed of (landfill).

There is an efficient solution that you can now easily adapt in your household: switch to rechargeable batteries. Whereas conventional batteries go through one use and then are thrown out, rechargeable batteries can be reused hundreds of times. Although the initial purchase of the charger and the batteries is more expensive than conventional batteries, you will save money over time, considering that you can get hundreds of uses out of them. Furthermore, recharging batteries is more energy efficient than creating new batteries. Rechargeables are also designed to have a better performance: disposables begin at 1.5 volts and decrease until they die. Rechargeables remain at a solid 1.2 volts for the entire time they are in usage, without decreasing, which optimizes performance.

My mother has been using rechargeable batteries for some time now, and I have yet to notice any drawbacks. They save the frustration of discovering you’ve run out of batteries just as you need one, and the time it takes to run to the store and buy a new pack.


Using Plastic Bottle Tops to Seal Food Bags
Here is a cute and simple way to recycle part of your plastic bottles and save the cost of purchasing bag clips! Bottle seals are easy to make, and not only do they tightly seal bags, but they also make pouring bag contents easier. 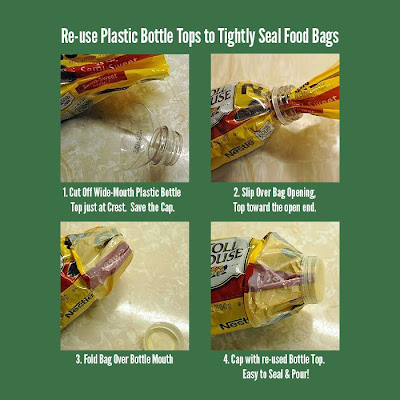 Picture courtesy of: http://underdesign.wordpress.com/2012/03/16/re-use-plastic-bottle-tops-to-tightly-seal-food-bags/
Posted by Unknown at 8:24 PM