This week, I am honored to invite my grandmother, Betty Green, onto Viridorari to talk about owning a hybrid vehicle. Grandma decided, after many years of having discussions about her car with other people, that there are several misconceptions about hybrid vehicles. She wanted the opportunity to clear those up, and advocate the use of vehicles like her Toyota Prius.


Grandma (Betty Green) worked for over twenty years as a quality manager at an international company located in Fairport, NY before retiring in 2012.  She lives with her husband, Ron, in Geneva, NY. She is the owner of B’s Garden Treasures, her pressed flower art business. She also serves as the Public Relations Director for the Worldwide Pressed Flower Guild, a non-profit organization dedicated to promoting public education to unite pressed flower artists from around the world.  You can see her art at www.BGTreasures.com and http://blog.bgtreasures.com/. You can contact Betty at info@BGTreasures.com with questions and comments about her article and with inquiries about purchasing her artwork.

I strongly encourage you to take the time to look at some of Grandma's artwork. Only in recent years has she developed a passion for pressed flower art, and even in that short time she has become so talented. Every time I visit her and see her new pieces, it seems that she has only improved. For those of you who love the beautiful scenery of nature, I know you will love her art.

I have reached the conclusion that many people don’t understand hybrid cars, and I’d like to clear up some misconceptions.

I purchased my Prius hybrid in 2007 and I love it! It operates on a combination of gasoline and battery. I don’t need to do anything but turn it on and drive it, although my method of starting it is a bit different from previous cars I have owned. I simply press the start button while my foot is on the brake. As long as my key is in the car (e.g. in my purse), I am good to go. The car automatically determines when it needs to use the gasoline engine and when it can use the battery. My battery charges when I drive it; I do not need to plug it in.  In fact, it doesn’t even have a plug. I believe this requirement is limited to electric cars which rely entirely on a battery.

Many people seem to be concerned about the cost of replacing the battery in hybrid cars. My hybrid car has over 100,000 miles on it and the battery is still going strong. According to our car dealer, battery replacement is the exception and not the norm.

According to How Stuff Works, “A replacement hybrid car battery can range anywhere from $1,000 to more than $6,000, depending on the year and model of car.  They also indicated that car manufacturers are set on reducing prices. Why would they do that? It comes down to this: “Basically, car manufacturers want their products to succeed. Failures in performance hinder that success, so most hybrid car batteries are designed to last the lifetime of the automobile.”

I can modestly control the amount of gasoline my Prius uses by the way I drive.  For example, I can get slightly better fuel mileage if I accelerate slowly vs. aggressively, but I believe this fuel-saving hint applies to all cars. I don’t notice a significant difference between city driving and rural driving. If I need to accelerate, I can do so without any fear that I will be left behind when climbing a hill.  My hybrid car reacts to my need to change speeds similar to the way a non-hybrid car would. I recall reading in the paper several years ago that Al Gore’s son got a speeding ticket while going 120 mph in his Prius. I have little doubt that my car can reach this speed but have opted not to test it as I do not like speeding tickets.

I have an eleven gallon fuel tank. I seldom pay more than $30.00 for a tank of gas – even with today’s prices. My husband and I recently took a road trip to Florida. We drove 65-70 mph on the express ways just like you would with a non-hybrid car. The major difference is that we drove over 1,100 miles to get there and spent only $92 for fuel. My husband’s 2010 F150 takes that much fuel when he fills up every couple of weeks with only local driving. If we had taken his truck to Florida instead, we would have paid more than twice as much in fuel costs, based on my calculations below.


Based on today’s fuel costs, for the six years I have owned the car I have saved over $11,400 in fuel expenses with my hybrid compared to a vehicle which gets 19 mpg that has gone the same distance, and over $8,700 for a vehicle which gets only 22 mpg. I believe that, if you are like me, and will drive a car for a number of years, that the additional cost of purchasing a hybrid will be paid back through the fuel savings.  Of course, that doesn’t take into consideration the benefit of burning less fuel, which lessons our impact on the environment. Fuel dependency is a major issue in our society, and by investing in hybrid and electric vehicles, we can fight back against that dependency.

Currently, there are many more hybrid and electric cars on the market than there were in 2007 when I made the decision to “go green”. But, if I had it to do it all over again, I wouldn’t think twice about buying another hybrid car. In fact, my son recently purchased a Prius based on my testimony. He and his wife, Joanna, are very satisfied with their new vehicle. Arron humorously said: “It’s like a spaceship,” and Joanna, declared: “I love it, the drive is super smooth and I love how quiet it is.” Arron and Joanna are currently raising my youngest grandchild, and I’m glad that she’s being brought up in an environment that values the health of the planet. 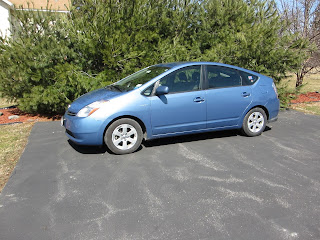