Note: I will be skipping out on Suggested Reading today. I'm a little overwhelmed at the moment. I'm sorry for any inconvenience. If you haven't read Suggested Reading #1 or #2, be sure to check those out. I do suggest that you read this week's guest writing about solar energy, which was posted yesterday as a separate entity from Viridorari's scheduled posts. Thanks again, Chris, for your amazing article.

If you are like how I was about a year ago, you probably love Ben & Jerry’s ice cream, but have little knowledge about the company itself. I was pretty clueless before I went on a tour of the Ben & Jerry’s factory in Vermont as a side stop on a college visit. My mom and I are big fans, so we thought it would be fun to check out together. It turns out, Ben & Jerry’s is much more than an ice cream company. It’s also a company devoted to community service, activism, and ethical responsibility, which is why I am shining the activism spotlight on Ben & Jerry’s today. I’d like to share with you the amazing story of Ben Cohen and Jerry Greenfield, and chances are, next time you buy a carton of their ice cream, you’ll feel good about it. Also, Free Cone Day is on April 9th! Get out to a Ben & Jerry's scoop shop for a FREE ice cream cone! This is something the company has been doing since 1979 when Ben and Jerry wanted to celebrate their first year of business together.

I’ll start with Ben & Jerry’s three interrelated part mission statement:
How did Ben & Jerry’s get to this social and economically responsible point in its development? To answer that, let’s go way back to the beginning and meet the co-founders of the famous ice cream company. 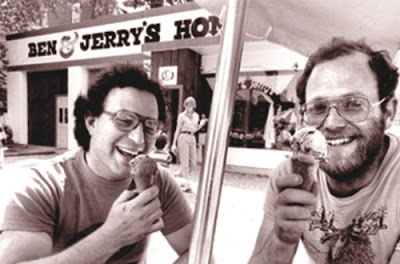 Picture courtesy of: http://www.pravaideja.com/prica.php?q=566
Ben Cohen and Jerry Greenfield went to school together in Long Island, New York, where they forged a strong friendship. They both struggled in college- Jerry couldn’t get into any med schools after he finished his undergraduate, and Ben dropped out of all his colleges. They knew something had to change, and although they didn’t know much about business, they decided that they were both knowledgeable in the practice of eating, particularly eating ice cream. They split the $5.00 cost of an ice cream making correspondence course at Penn State University, and then they combined their life savings and a bank loan to open their first ice cream shop in an old, renovated gas station in Burlington, Vermont.

They wasted no time in crafting ice cream flavors that they’d always dreamed about, and soon, there were long lines of customers stretching out the door. Ben and Jerry started selling their ice cream to grocery stores, restaurants, and supermarkets in Vermont and beyond.  In 1980, the two friends rented a space in an old spool and bobbin mill in Burlington so they could start packaging their ice cream into pint containers. In 1983, Ben & Jerry’s ice cream was used to make the world’s largest sundae, which weighed in at 27,102 pounds. Two years later, the Ben & Jerry’s Foundation was established. Essentially, the foundation takes some of the company’s profit and, in modern times, awards about $1.8 million annually to eligible organizations across the United States. The foundation’s philanthropy is employee-led by employee advisory groups who consider proposals and recommend grants. The foundation currently has five grant programs, which you can find here.

In 1988, President Reagan recognized the two college drop-outs as the “Small Business Persons of the Year” in a White House Rose Garden ceremony. In 1990, Ben & Jerry’s placed a “Support Farm Aid” message on 8 million pints of ice cream to encourage support of family farmers, and the following year, the company sent a circus bus on tour; the bus had solar panels on its roof to power onboard electronics. Ben & Jerry’s used the bus to send out a message in support of solar energy. The ice cream flavor One Sweet Whirled debuted in 2002 to promote environmental action against global warming. In 2005, Ben & Jerry’s protested the proposed oil drilling of the Arctic National Wildlife Refuge by creating a 900 pound Baked Alaska from Fossil Fuel ice cream and serving it on the US Capital lawn with the help of Greenpeace and the Alaska Wilderness League. They struck up another protest in 2007 against the FDA’s decision that meat and milk from cloned animals was safe to eat. The protest in Washington D.C. urged people to speak out against cloning farm animals.

Since the 80’s, Ben & Jerry’s has had a socially-aligned sourcing policy, and the company has been involved with Fairtrade for many years now. In regards to Fairtrade, Jerry Greenfield said: "Fairtrade is about making sure people get their fair share of the pie. The whole concept of Fairtrade goes to the heart of our values and the sense of right and wrong. Nobody wants to buy something that was made by exploiting somebody else." Ben & Jerry’s plans to have all of their ingredients in all of their ice cream flavors Fairtrade certified by 2013- this year!

Ben & Jerry’s not only ensures that the business they conduct is fair; they also ensure that the animals that provide the ingredients for their ice cream are treated fairly. The eggs used for Ben & Jerry’s ice cream in the United States come from hens on Certified Humane, cage-free farms. Certified Humane cage-free standards guarantee that hens have a wholesome, nutritious diet, access to clean water, and plenty of space to engage in natural behaviors. Being a humaneitarian myself, I can really appreciate this aspect of Ben & Jerry’s. Also, through their Caring Dairy initiative, Ben & Jerry’s encourages farmers to be an ethically responsible part of their communities, based on the amount of their money they reinvest locally, the percentages of goods and services sourced locally, and the amount of visitors to the farm and community awareness.

In 2009, Ben & Jerry’s ice cream containers became Forest Stewardship Council (FSC) certified FSC certification means that the pulp in the paperboard comes from forests that are managed for the protection of wildlife habitat, maintenance of biodiversity, and other forest-sustainability criteria. The transition to FSC-certified paperboard has reduced 1,000 tons of Ben & Jerry’s waste per year compared to the old container. The company’s has a long-term goal of using unbleached paperboard and finding food-safe renewable resins that can make their packaging fully compostable. For those of you who started a compost pile, or have already had one, you may be able to added Ben & Jerry’s ice cream containers to your compost someday soon. To learn more about composting, check out Viridorari’s second “Green Challenge,” which features a Guest Writer.

Ben & Jerry’s has made tremendous headway in the United States to be leaders in the use of Natural Refrigerants, which includes hydrocarbon refrigeration. In 2011, the U.S. Environmental Protection Agency (EPA) approved Ben & Jerry’s petition for the commercial use of hydrocarbon freezers. The HC freezers are significantly more energy-efficient and use gases with less negative impact on the planet than standard freezers. The company will be bringing thousands more of these freezers to the marketplace over the next several years. These freezers are also cheaper to use than the old models because the technology is more energy efficient. Because of this cost efficiency, Ben & Jerry’s hopes that other American companies will be quick to jump on the HC freezer bandwagon. In Europe, HC freezers are already in common use.

This may seem like a lot of activism for one company, but the truth is, I didn’t even get through half of the things that Ben & Jerry’s does to make the world a better place. To learn about everything else, check out the “Activism” page on the company website.

Although I’ll always feel a little guilty when I crack open a pint of Ben & Jerry’s ice cream for health reasons, my conscious will rest easy knowing that I’ve bought the product from a company that truly cares about the world and is always striving to improve its positive impact and lessen its negative impact. The best part of all: the ingredients are Fairtrade and humane certified, and tantalizingly delicious.

Go buy a pint of Ben & Jerry’s ice cream, and find out how fantastic ethical responsibility can taste. 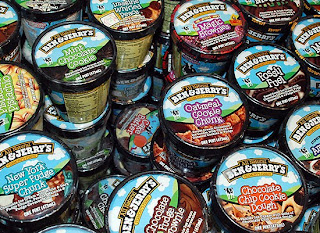 Animal of the Month Update 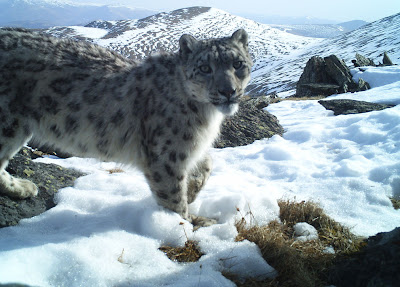 The snow leopard’s mating season is between January and mid-March, and the female gestation period is approximately three and a half months. Female snow leopards usually have between two and three cubs, and they give birth in rocky dens lined with their own fur. At three months old, the cubs begin following their mother on hunts. They stay with their mother through their first winter. 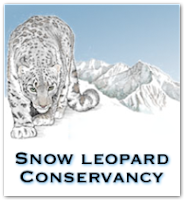 SLC works to educate farmers and herders in areas local to the snow leopard habitat in order to decrease hostility between humans and the predatory cat. The objectives of their educational programs include:

You can help SLC conserve snow leopards by visiting this webpage. There, you can make a direct donation, shop on the online store, and learn how SLC uses your money. Items in the SLC store include books, t-shirts, greeting cards, posters, wine, and more. There is also an “Adopt a Snow Leopard” option, which is similar to Bat Conservation International’s Adopt a Bat program. You can visit SLC’s website to learn more about the organization and what they do here.